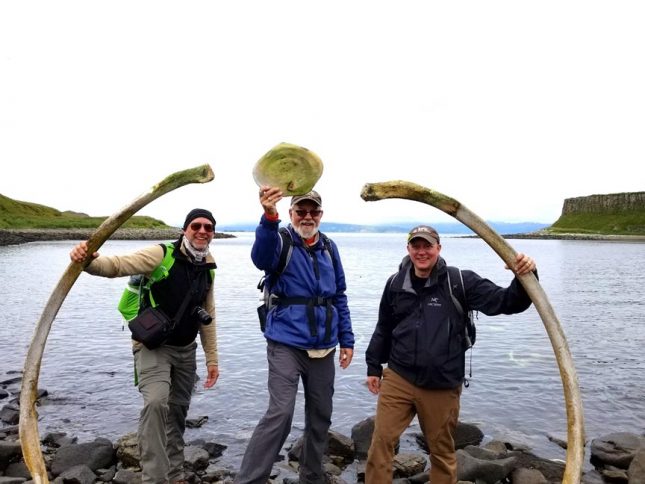 Why the SAFARI camp experience is so unique: world-class fly fishing plus sooo much more. These guys are holding whale bones.

2017 was the year of the pink salmon and silver salmon. The silver run was jaw-dropping and the beach fishing for pinks was absolutely ridiculous. The chum salmon run was good/typical and the Dolly Varden fishing was excellent in the middle and upper the river. We didn’t fish the bay that much in 2017, but we did find a few halibut for dinner when we did head out. Yum. We’ve had strong silver runs the last few seasons, but the silver run of 2017 can be summed up in two words – HOLY COW. Often times the best silver salmon fishing is on the helicopter fly-out fishing days, but truly impressive numbers showed up on the tidal flat right in front of camp – like the old days that our longtime guests remember. Fresh silvers could be seen jumping everywhere on incoming tides, especially during peak weeks in September. Wow, what a run it was. Pink salmon caught off the beach.

After the largest pink run we’ve ever seen in 2015, we fully expected a large run in 2017 (since pink salmon follow a fairly strict 2 year life cycle). The predication came true – we had a massive run again this year, although ever so slightly lighter than 2 years ago. Believe it or not huge pink runs can result in “too many fish” at times, but it’s certainly a good problem to have, especially if you fantasize about extremely high volume salmon fishing in Alaska.

The Dolly Varden fishing was excellent overall and on par compared to a typical season, but the best fishing was around Lion’s Head in the upper river. And well, ahem, on a couple of the helicopter fly-outs to a secret river that we rarely fly to anymore… because it’s out of the typical flying budget. The bears were thick this year on the tidal flat and in the meadow area – sows with cubs were everywhere. Guides had to stay especially alert. The cool thing is we viewed the bears pretty much everyday while fishing and from the observation table at the end of the day back at camp. The bears were especially thick in late July and August, but seemed to “thin out” a bit in September.

We saw at least two moose in our home bay that I can recall, but sighted several from the air on the fly-out fishing days and on the Saturday charter flight between King Salmon and camp. Caribou sightings were light. Wolves were spotted a couple times from the air. As usual, though, we saw a fair amount of moose, caribou and wolf tracks in our home bay, but saw TONS of tracks in the even more remote areas we access on heli-fishing days. A busy bear year keeps guides on their toes.

Whale sightings were light overall, but above average in late July and early August.

Multiple species of sea birds were seen throughout the season from the boat, as usual, but horned puffins seemed extra thick this year. Migrating duck and geese sightings were heavier than average – it’s always a treat to see a lot of emperor geese. And we did see river otters again this year (last year we didn’t see a single one, which was a first). Savoring a dry moment during a wet week!

The weather was wet again this season, but thankfully not quite as wet as 2016! However, we must especially acknowledge our first week of guests (which included 6 ladies) for tolerating the wettest week of the year in early August. Thankfully the fishing was still excellent that week. The takeaway is buy good rain gear when fly fishing in Alaska. However, remember good rain gear is no substitution for just being mentally prepared and having a positive perspective (aka, having a good, happy outlook on life even when you’re soaked to the bone).

Like 2016, the upside of a wet season is healthy river levels. We started off with good flows and ended with good flows, and that’s a good thing for future salmon generations.

Beach fishing for salmon on the Alaska Peninsula is ultra, ultra unique.

Check out the 2017 SAFARI camp photo gallery for some great images from a great season of fishing and adventure on the Alaska Peninsula!