Just when you think the week cannot get any better, at the end of the week we fly out in a meticulously maintained Bell Jet Ranger III helicopter to access other areas of the Alaska Peninsula rarely seen by human eyes! We have 6 or 7 different helicopter fly-out destinations, depending on the time of season, and each is uniquely different than the rest.

Without question, the helicopter fly-out fishing will likely be the most exciting part of your week! We’ll fly past heart-throbbing Alaska Peninsula scenery and may access remote coastlines, nameless streams, and hike into secret lakes. During late August thru September we will fish Yantarni Bay, Alaska, well known for its incredibly prolific run of silver salmon. 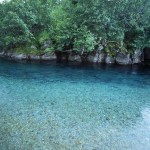 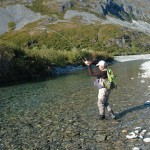 (By the way, the creek we heli-fish in Yantarni Bay does not have any other fishing camps or regular fishermen there. In fact, we’ve seen other people, usually do-it-yourself moose hunters, on that particular drainage only 2 or 3 times in nearly 15 years.)

What guests say about Safari Camp

“EPIC’s Safari has great fishing but that’s not what keeps going back time after time. It’s the place and the people. It’s the wildness, the spectacular beauty, the animals and birds and a staff whose only goal is to offer up a variety of experiences that capture wild Alaska at its best. This place is unforgettable, it has become a part of us forever.”